BuildCraft
The Quarry is a machine added by BuildCraft. It allows for unmanned mining of a large area. The Quarry can be powered in many different ways. A tutorial illustrating how to set up a Quarry can be found here.

The default frame of the Quarry will occupy an area of 11 x 11 x 5 and excavate a 9 x 9 area of land. These dimensions can be increased, up to 64 x 64. To adjust the size of the Quarry, four Landmarks will need to be placed in a square or rectangular pattern, then activated by right clicking one of them.  Note that powering a Landmark with a redstone signal will emit a beam that will travel to the extent of where the following Landmark can be placed, 64 blocks, in all directions. The Quarry will then need to be placed next to one of the Landmarks. A black and yellow line will appear when the Quarry is placed. The line is where the frame will be built.

Upon starting, the Quarry will clear the area within the black and yellow bars and build a frame. Once the frame is complete, it will spawn a crane-like structure that will begin to mine the area one block at a time. These blocks will be deposited into any adjacent chest or pipe. If there is no chest or pipe, the mined items will be ejected from the top of the Quarry. There is no need for a Wooden Pipe to fetch the items; the Quarry will place the items into a connected Stone Pipe, Cobblestone Pipe, Gold Pipe, Iron Pipe, or Diamond Pipe.

In the event the quarry encounters Lava, the rest of the blocks under the Lava will not be mined, due to the fact that the Quarry stops at Lava and/or Bedrock. A measure to prevent this issue is to fill the Quarry's excavation area with Water. This will turn the Lava into Obsidian, which the Quarry can mine. If the Quarry reaches Bedrock, it will require relocation before it can mine again.

Quarries can be powered using MJ, BuildCraft's form of power, or EU, IndustrialCraft's form of power. When using MJ to power a Quarry, Engines must be used. Any type of engines can be used, but Steam Engines are a good idea. Redstone Engines are rather slow, and with Combustion Engines there is a good chance you Quarry will explode. When using EU to power a Quarry, an Energy Link is the best option. Using an Energy Link early in the game with a Geothermal Generator next to the Energy Link is a good idea. It is quite cheap to build and is easily fueled by Lava Cells which can be easily obtained using tin to make empty cells by filling them with Lava.

The Quarry, like all other BuildCraft Machines, has an internal energy storage in which it stores MJ until it can perform an operation. Because of this, the Quarry can be powered by any BC compatible engine. For the Quarry to operate at maximum mining speed, it needs 9 MJ/t, which is just under 2 Combustion Engines running on Oil, outputting 5 MJ/t each, just under one Combustion Engine running on fuel, outputting 10 MJ/t, or 9 Steam Engines, outputting 1 MJ/t each. 9 Redstone Engines at peak efficiency will also work.

As the Quarry has only 4 sides free to attach Engines to, one way to power a Quarry is to place 4 Steam Engines on all 4 sides. To run the Quarry at full speed with Steam Engines, Conductive Pipes must be used.

The Geothermal Generator is an ideal choice for power in the Nether, given the practically infinite quantity of lava available, and its energy output of 20 EU/t is near the maximum energy requirement of the Quarry.

A Quarry can function at any level. Simply placing it against a shaft wall and powering it is all that is required to start the default 9 x 9 area. The blocks in the frame area will be destroyed.

It is possible to create a Landmark frame as per above ground. It is not necessary for there to be an empty path for all of the Landmark beams. The beams can cross through all blocks.

You may also want to carve out the entire area inside the frame, as these are not mined, simply destroyed. To know exactly where, after setting your landmarks, Place your quarry but do not power it. This will give you a black and yellow frame you can use as guidelines.

You may also do this above ground as you are not limited to only underground.

A Quarry can also function in the Nether, following all the same principles as above. Nether specific behaviors to note include:

If you are thinking if setting one up, here are some things to remember: 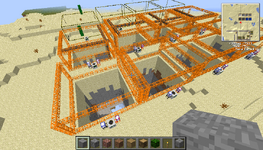 Another Quarry system in the desert. 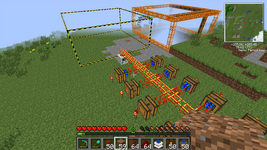 Powering a Quarry with Redstone Engines. 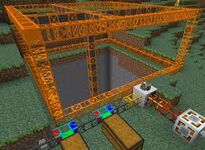 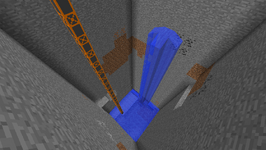 Watering a Quarry to prevent lava from stopping the Quarry prematurely. 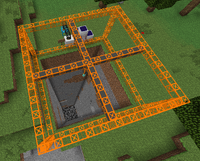 A default quarry that has dug down to bedrock. 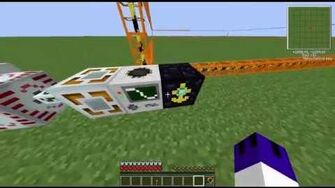