The Nuclear Reactor is one of the most powerful ways to generate EU. However, they are very dangerous and require careful observation to control. One bad setup can destroy the reactor and everything around it. If this is all a bit over your head, you can try this tutorial. It will guide you through building a safe, powerful and automated Nuclear Reactor. For design ideas, see the Advanced Layouts page.

The Nuclear Reactor, and its 6 added chambers, act as a single inventory. When a chunk boundary is running through the reactor, the chambers and their contents can disconnect and drop as items. This can disrupt the regulatory system of the reactor, resulting in a meltdown. Therefore, it is recommended to place all reactor parts and cooling system at the same chunk, or if you can't, using a World Anchor is another option.

The Nuclear Reactor can explode horribly if you don't activate it with care.

Nuclear Reactors can be very complex and are recommended for experienced players only, but when controlled, they are arguably the best source of EU, able to generate up to 2,048 EU per tick - millions over the life of the Uranium Cells. Uranium Cells generate heat as well, and the reactors must be cooled. If not cooled, the reactor will have a meltdown, causing a massive explosion. Nuclear Reactors can be cooled with Ice, Water Buckets, Coolant Cells, or flowing water adjacent to the reactor.

The maximum rate of passive cooling of a Nuclear Reactor is about 70 heat per second. This limits the sustained average power output of any passively cooled reactor by a great amount, as large nuclear reactors can generate about 2,000 heat per second.

To actively cool a reactor, it must be provided with ice. The Nuclear Reactor needs 1 ice per second for every 300 EU/tick. So when the reactor output reads 1970 EU, it will take about 7 ice per second to keep the reactor cooled.

Here are some of the terms often used when describing a reactor and its design.

A list of the various components that can be used within a reactor.

The exact heat effects for reactors are:

Note that while the chunks around a Nuclear Reactor can unload, the Nuclear Reactor itself will remain loaded once it has become loaded. Because of this an active reactor in an unloaded chunk will melt down despite any control mechanism applied to it.

The explosion intensity depends on the contents of the reactor. An empty reactor will have a radius of 10 blocks, with each Uranium Cell increasing the radius by 3 blocks and each Integrated Reactor Plating reducing the radius by 1 block. The maximum explosion size is configurable by the client in singleplayer or the server in multiplayer and is set to 45 blocks by default.

A relatively simple way to protect against a nuclear meltdown is to use reinforced stone, glass, and doors. To the right, there are two pictures showing the blast resistance of reinforced materials. In the top photo, there is an unprotected explosion (left), an explosion inside a 1 block thick solid Reinforced Stone (right top) and 2 block thick solid Reinforced Stone (right bottom). Notice the tiny hole near the top of the wall. The bottom photo shows a crater caused by a nuclear melt-down where the left half of the explosion was protected by a 3x3 wall of Reinforced Stone.

Another way to protect the surroundings is to make a three block thick wall of reinforced stone and water, filled with water in the middle. For additional protection, this structure can be supported by a Basalt, Basalt Cobblestone or Obsidian shell.

Placing the reactor inside a body of water reduces damage significantly after a reactor explosion.

There is another way of protecting against meltdowns, which is to use a Thermal Monitor connected to a simple redstone circuit. This method is 100% safe. In the design to the right, once the Thermal Monitor is triggered, the redstone is locked on, and the reactor will stay shut down until it is manually restarted. The Thermal Monitor will turn on and off every time the reactor drops below or goes above the set temperature, allowing the reactor to hover at that temperature. It is even possible to fill a reactor with nothing but uranium and still be safe, though it would take a very long time to cool.

Note that this will not work with Breeders. The Depleted Isotope Cell will still generate a very small amount of heat each tick. If there is not some form of cooling system, the reactor will explode.

If enough power is being created, a more advanced way to protect from unwanted nuclear ventilation is through the use of MFFS Projectors and the Reactor Containment Field Projector. A forcefield will block all of the blast from escaping. It's suggested that the field is powered with the reactor itself to ensure an ample supply of energy for the field. It will monitor the heat level of the reactor, provide water cooling if wanted, as well as contain the blast, should it overheat. Another bit that is extremely useful for preventing explosions is the MFFS Reactor Monitor and Client. The monitor will check the heat level in the reactor, and will send a signal to the Client when the reactor is on, and at variable levels of heat. When a set level of heat has been reached, the Client will turn on a redstone signal, which when used with a redstone wire, can turn off the reactor. This is a surefire way to prevent the reactor from overheating if used properly. A possible fail-safe, if everything else fails, a single TNT block can be triggered by a thermal monitor, blowing up the reactor, but saving the environment and the contents of the reactor. This will only cause the amount of damage TNT would, not a shiny new crater.

All reactor designs fall into a set of pre-defined categories. This makes it easier to see, at a glance, how effective a design can be when either looking up designs on the IC forums or posting a design yourself.

Mark I reactors generate no excess heat each reactor tick and thus are safe to use continuously for as long as you supply Uranium. Mark Is tend have a low efficiency, but that's the price of a completely safe reactor.

Mark Is have two sub-classes: Mark I-I for design that do not rely in outside cooling in anyway and Mark I-O for those that do.

By using external cooling, such as an energy condenser / energy collector duo constantly pumping ice into your reactor, it is possible to have a Mark I with an extremely high efficiency (greater than 4).

Mark II designs produce a small amount of excess heat and will need to be given a cool down period eventually to prevent the hull reaching 85% maximum heat or melting component. A Mark II must complete at least one full cycle before encountering heat problems.

The sub-class for Mark IIs denote how many cycles the design can run before reaching critical heat levels. For example Mark II-3 will need a cool down period after running 3 cycles in a row. Mark II s that can run 16 times or more get the special sub-class 'E' (Mark II-E) for almost being a Mark I.

Mark III reactors tend to have an emphasis on efficiency at the cost of safety. Mark IIIs are unable to complete a full cycle without going into meltdown and thus need to be shutdown mid-cycle in order to deal with the high amount of excess heat. This can be done manually or by using Redstone.

Mark IIIs have the additional condition that they must run at least 10% of a cycle (16 mins 40 secs) before reaching critical heat or losing any components.

Mark IVs still have to run at least 10% of a cycle, just like Mark IIIs. The difference being that Mark IVs are allowed to lose components to overheating, and that must be replaced before the reactor goes critical.

Mark Vs cannot run long without needing a cool down period. Having great redstone timer skills are recommended, or it will cause a meltdown.

As well as being Mark I to V, reactor designs also have one or more suffixes to better inform people about their performance.Single Use Coolants - A reactor that relies on a supply of ice and/or water buckets in order to maintain its classification should be suffixed with '-SUC'.

This suffix is for designs that also recharges isotope cells. Isotope cells charge up faster when the reactor runs hot, so heat management is important. There are three breeder types:

-Negative-Breeders slowly lose heat over time and will need heat to be added manually, or they can be left for a safe slow way to recharge isotopes.

-Equal-Breeders have exactly the same heat generation as they do cooling ability and usually only require a user to boost the reactor's heat level manually at the beginning.

-Positive-Breeders gain heat over time and will require more precise cool down management for the reactor to remain hot.

Reactors whose sole purpose is to recharge cells may not even have a 'Mark' classification and are simply called Breeders instead, with the efficiency/SUC suffix added.

Here are a few tips and things to look out for when using a reactor.

Note: A redstone transistor works so; one redstone current goes into a solid block attached to a sticky piston. On the other side is a redstone repeater. When the piston retracts, an active redstone circuit is cut off. This mechanism can be used over and over again so it isn't a one-time machine. The redstone comparator has basically the same function but it compares its two inputs, while the multi-component redstone transistor only outputs a signal when both inputs are enabled, just like a real transistor.

EE and the use of Reactors

Equivalent Exchange can be a huge help in moderating a nuclear reactor. Using MFFS Reactor Heat Control units, it is possible to moderate the desired temperature of the reactor, by either heating it up or cooling it down automatically. With the use of these units, even Mark V reactors can be run for much longer periods of time.

Using the Equivalent Exchange mod, you can have a Energy Collector or Energy Condenser generate ice blocks and have a Retriever pump them directly into the units, providing an unending supply of ice or water buckets for the reactor.

Not only this, but due to the low EMC cost of Uranium, if you build the most basic reactor setup, a Uranium Cell surrounded by 4 Coolant Cells, and all the resultant energy is used by a Mass Fabricator, the UU-Matter is used to make 8 Glowstone then condense it to create more Uranium, you can easily keep your reactor running without any outside materials. Using this process, you can easily end up with more Uranium than you started with.

With a special setup it is no problem to make a reactor that cannot explode. Here are two versions, a very basic, the second stage of the basic and the ultimate version for advanced players with a very high energy output. 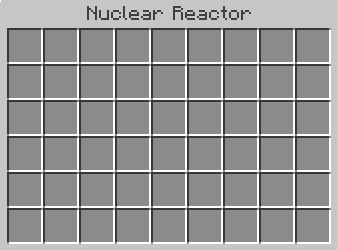 You can test potential reactor layouts with the following Java Applicaton: