The Coke Oven is a 3x3x3 brick structure, hollow in the middle, for converting Coal into Coal Coke or Wood into Charcoal and producing Creosote Oil as a byproduct. The Oven is built out of 26 (the center is hollow) special bricks made from Brick and Sand. If broken down, it takes 104 Clay and 130 Sand to build one Coke Oven, although they do not have an EMC value. It takes 69 EMC to make a single Coke Oven Brick and it takes 1794 EMC to make a complete Coke Oven. When building a Coke Oven, you will know the Oven is complete when the window appears in the middle block on the sides. They cannot be built adjacent to each other; there must be at least one air block in between ovens.

Converting Coal into Coke or wood logs into Charcoal is a slow process, it takes three minutes to convert one piece of Coal into Coal Coke. You will probably want to build several Coke ovens if you plan to make a lot of rails.

The Coke Oven can be loaded and unloaded via Loaders or Buildcraft pipes. The entire 3x3x3 Coke Oven is treated as a single block, similar to a Furnace. Coal or Wood Logs are loaded into the top. Coal Coke, Charcoal, and/or Creosote Oil bottles/buckets are unloaded from the sides. Buckets or Glass Bottles are loaded from the bottom.  Creosote Oil can also be pumped out with waterproof pipes and engines.

It is highly recommended that you do not use Coke Oven Brick for decorative purposes. Incomplete Coke Ovens periodically check if they form a valid Coke Oven, in mass quantities this could lead to performance glitches, framerate drops and server lag. 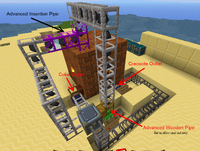